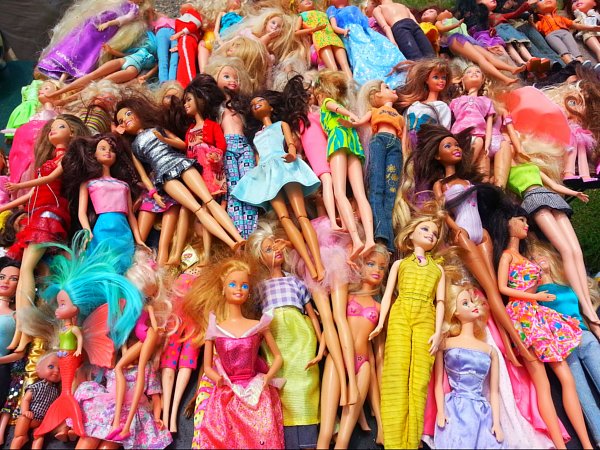 I counted 28 Barbies, which I I think is a record

My 4-year-old daughter has 28 Barbie dolls. I counted each of them. Twice. I came up with 28 both times.

To be clear, that’s 16 more bodies than the Los Angeles Lakers can put on the court on any given night. It’s Oprah’s hairdressing staff. With just the human capital in this lot, you could do a pretty good production of “Les Miserables.” About this many eager faces flock to meet you when you walk into American Eagle Outfitters (provided you are under the age of 25). You get the idea.

Up until a few weeks ago, I figured my daughter had four or five of the dolls around the house. Wow, did I lowball myself like the media trying to count Tiger Woods mistresses. The truth? The others were hidden like plastic, blonde ninjas in secreted alcoves and other piles of toys.

My wife and I bought the dolls, mostly as rewards for good behavior. They also came as birthday gifts and gifts from friends. A few of the dolls were actually passed on from grandparents, including many of the clothes. However, the majority of them were off-the-shelf, fresh-from-the-box models.

Speaking of, if you haven’t bought, attempted to open and distribute the contents of a new Barbie doll, take heed. Opening the packaging and removing every … single …  piece … of plastic … brings about the same amount of joy as standing in line at the DMV – for the rest of your life. Now, picture yourself doing this 27 times. Every pink high heel. Every small purple brush. Every hair dryer that needed a flower sticker. Every accessory that will eventually find its way into our vacuum cleaner bag.

Now, at some point, I knew we’d reached critical mass on the number of Barbies she owned. When I finally counted all of them (a very guy thing to do), I presented this fact to my wife.

“That number doesn’t bother you?”

“Wait. Don’t change the subject. Are we going to continue to buy her Barbies?”

“If she wants them.”

Now, if you’re scoring at home, then you know the cost for these dolls. Their clothing and the litany of accessories that accompany the dolls would make the cast of ‘The View’ blush. Mattel should hang a plaque at corporate headquarters with a picture of our family on it that reads, “Thanks for funding our corporate  401K account.” There’s an investment here, not just in my cherub’s heart and mind, but in material and storage.

The thing is, if a guy has 27 guns or, like Jay Leno, 27 cars, we’d barely blink an eye. That 27 pairs of shoes easily line my wife’s closet floor doesn’t even faze me (any more). Twenty seven stuffed animals? No worries (unless you’re like 30; then, that’s just … odd).

And it’s not like the status quo exists. She’s 4. So, when the opportunity comes to add another to the plastic blonde tribe, she’s eager. Aggressive. She’s even making choices online so that when the toy aisle appears, she’s prepositioned for success. Did I mention she’s 4?

Realizing that my daughter’s Barbie story is similar to many of your own, what I seek here is not sympathy. Rather, as I am the first male Erma, I therefore seek solutions. That is, I want to get some return on investment from these dolls that, collectively, would have bought me an iPad. I have three so far:

— Garden markers. Dress each up in a different outfit and stick them into one of the rows of the garden to indicate a plant type. Of course, that only accounts for about a half dozen.

— Creep stop-motion zombie extras. A film you might see on YouTube; a little ketchup on the outfits, some bad sound effects, a guy screaming “Why are you picking on zombies? WHYYYYY?”. Long, leggy, plastic BRAAAAAINZ!

— Barbie juggling. Still working the logistics of this one.

And of course, she’ll continue to play with them, but there’s 28. So, you’re ideas are welcomed here. Meanwhile, I think I’ll go count them again to see if she snuck any others in on me.